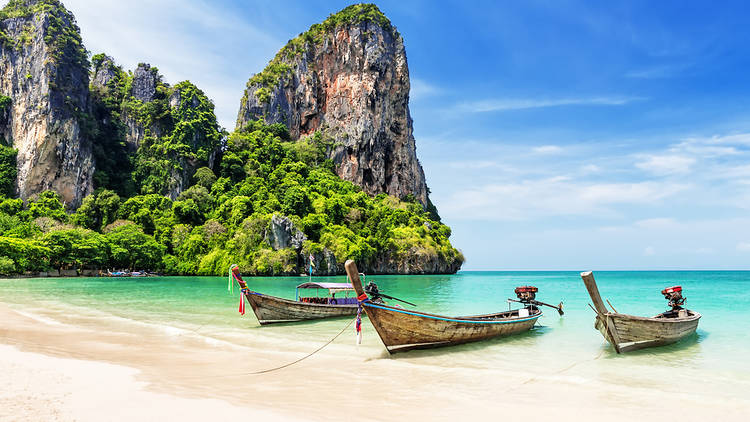 Thailand is a Southeast Asian country famous for tropical beaches, opulent royal palaces, ancient ruins, and ornate temples with Buddha figures. Bangkok, the capital, is a fascinating blend of ancient and modern. A modern cityscape rises along canal-side neighborhoods. There are iconic temples, such as the Emerald Buddha Temple, located in the city center. Popular beach resorts include Hua Hin and Pattaya.

If you’re planning a visit to Thailand, you’ll probably be tempted to start your itinerary in the country’s capital, Bangkok. This vibrant city is home to ornate shrines and a thriving street life. Along the canals, the Chao Phraya River flows past the royal district of Rattanakosin, where you’ll find the grand and sacred Wat Phra Kaew Temple. You’ll also want to visit Wat Pho Temple and its colossal reclining Buddha, as well as the Khmer-style spire of Wat Arun.

Chiang Mai, Thailand, is an ancient city in northern Thailand. Founded in 1296, Chiang Mai was the capital of the independent Lanna Kingdom until 1558. The Old City area still retains the vestiges of walls and moats. Hundreds of Buddhist temples dot the city, including the elaborate 14th century Wat Phra Singh and the serpent-carved Wat Chedi Luang. Its architecture is also impressive.

A holiday in Hua Hin, Thailand, is one of the most pleasant ways to get away from the hustle and bustle of city life. Its coastal location makes it tropical year-round, with temperatures ranging from 23 to 33 degrees. Hua Hin’s winters are drier and have lower temperatures than summers, with the exception of November and January. While this is the dry season in Thailand, temperatures do dip below 30 degrees at night.

If you’re looking for a tropical island getaway, you’ll want to consider a trip to Koh Kut or another nearby island, which are both pristine and untouched. Although the roads here are almost deserted, you can explore on your own scooter or motorbike, especially since there’s no vehicle ferry on the island. This island is a fantastic choice for a family vacation or a group of friends looking to spend the day at the beach.

If you are a nature lover, Khao Yai National Park is a must-visit in central Thailand. It is a forest and grassland national park that features 50 km of hiking trails and a 20-meter-tall waterfall, Haew Suwat. You will also find various species of wildlife here. The park’s varied habitats are also home to a large number of plants and animals.

The northern city of Chiang Rai, Thailand is located in the mountainous province of the same name, near the borders of Myanmar and Laos. The city is famous for its Wat Phra Kaew, a royal temple once housing the jade Emerald Buddha. A replica is displayed today at the temple. Also worth visiting are the 100-pillar Navel City Pillar and the Mae Fah Luang Art and Cultural Park, which showcase Lanna artifacts.

Located in northern Thailand, the northernmost province of Chiang Rai is part of the Golden Triangle and borders the countries of Myanmar and Laos. The region is well known for its beautiful and remote hill tribes, and the city of Chiang Rai is known for its unique night market. You can also visit the White Temple, a modern Buddhist shrine with murals and quirky modern sculptures. A visit to Chiang Rai is not complete without seeing the local hill tribe villages.